Article written by The DigitalTerror, articles and news about technology, gadgets and more

Google held one of the most anticipated tech events of 2016 on the 4th of October. Here is a breakdown of everything that was launched: 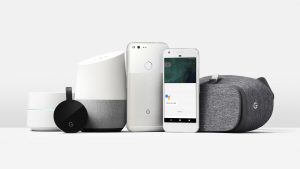 After a lengthy series of announcements regarding AI, Google introduced the Pixel and Pixel XL Phones. These phones, which only differ in screen size and resolution, come with flagship level internals. It is the first phone on sale with the latest Snapdragon chip from Qualcomm. These are premium smartphones that come with a premium price tag.

This is a wireless networking product that provides Wi-Fi throughout the home. It can be setup with as many devices as you need to provide coverage. It is sold as a single device or in packs of three. Only one of the devices needs connectivity to the router for internet access. After that, any additional device will use a mesh network to connect to the others. This allows convenient placement of the other units.

This Chromecast has been launched in addition to the standard Chromecast and Chromecast Audio. It mainly exists for people who have 4K TV’s and need to stream directly. At the moment most 4K content is on YouTube and Netflix. Google Play Movies will be rolling out 4K content shortly.

This is Google’s entrant into the home assistant space and is powered by Google Assistant. There is support for some home automation platforms, music playback, reminders, questions and more. It is a voice-activated speaker that has interchangeable bases to match its surroundings.