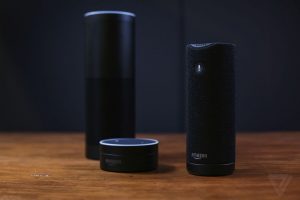 There are two hardware based voice assistants available today: The Amazon Echo and Google Home. They both do the same thing: they listen for a keyword and use any voice input from that point to structure a command. Google Home is a recent entrant, so it lags behind the Echo in both available third party integration and market share. However, now that the Echo has a competitor, we can expect large strides regarding performance and capabilities. Here are some improvements we can expect soon:

Alexa uses a very specific method of interpreting commands. Google Assistant, which powers Google Home, is better suited for natural language. We can expect big leaps in both recognition and understanding from both as they use machine learning and current use tune the service.

The biggest shortcoming for both assistants is that they respond to commands from anyone. Also, they respond to queries for calendar and lists for a single person or the primary account holder. In a future update, we can expect it to respond only to the owner and other authorized voices. Also, queries will be specific to the person asking them.

Recent announcements show that vendors will ship devices and appliances with Alexa and (later) Google Assistant support. The built-in support will finally allow direct device control by voice. Rather than simply switching appliances on/off using connected plugs, we will be able to tell the oven to reduce temperature directly or tell the washing machine to start a spin cycle.