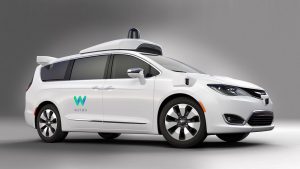 “Ride-sharing makes a lot of sense for the world,” he said at Bloomberg’s Sooner Than You Think conference on Cornell University’s Tech engineering campus in New York City. “For goods transportation, which could travel primarily on highways, there’s a good and compelling use-case there, too. Either of those two might be the first ones you see.”

Krafcik says the company is looking at several models for logistics and delivery. He did not share any plans, but there are rumors that Waymo plans to launch a taxi service in Chandler, Phoenix as soon as 2018. Also, we know from Krafcik that Waymo has at least one truck with driverless technology in testing.

To get automakers on board, Waymo is proposing a radical alternative to the current business model. Krafcik is pitching a per-mile business model to the carmakers, where the carmakers would make money over the lifetime of a car rather than a one-time charge. He says that this model will earn the carmakers more.

Waymo is in talks with several carmakers and may sign deals to use their technology.