It was only a year ago that the world was shocked to hear about a collaboration between IBM and Apple given how different these companies. 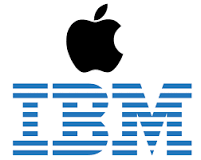 In understanding the businesses that IBM wanted to know more about, Tim Cook said, “We knew that we needed to have a partner that deeply understood each of the verticals. That had scale, that had a lot of dirt under their fingernails so to speak from really understanding each of these verticals and we found a kindred spirit in IBM.”

Both sides have clearly benefited from this a lot. IBM, for example, learned more about and introduced the ‘wow’ factor to enterprise software as a result.

Speaking of which, the two companies have created a new generation of enterprise software that looks and feels like consumer apps but that which will link to backend corporate systems.

According to IBM, both these companies have forged a successful partnership having solved a variety of problems that cover 10 industries and 40 job roles.