Google surprised everyone at their hardware event by introducing a product called Google Wi-Fi. It is a product that is used to give better wireless connectivity within a house or small office.

The device itself looks like a tall and white hockey puck. Each unit comes with an Eth 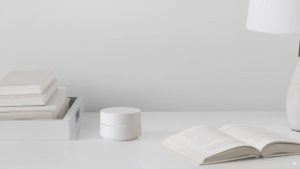 This mesh network allows the Google Wi-Fi devices to be placed in the most convenient places. Traditional wireless access points could do a similar extension of a network. However, that came with severe tradeoffs in performance. This has no tradeoff and there is better network coverage as the units can be placed anywhere.

Google Wi-Fi comes with other benefits. The devices are configured and controlled from an App. At this point, it is unclear if it is the OnHub or Google Home app. From the app, devices on the network can be given names to identify users. Internet access to these devices can be monitored and controlled using the app. The introductory video shows a mother switching of internet access when it was dinner time so the kids would stop and come downstairs.

The pricing was $99 for a single unit and $299 for three units. For the average two-story home, a three pack will suffice. While for an apartment, a single unit should do.