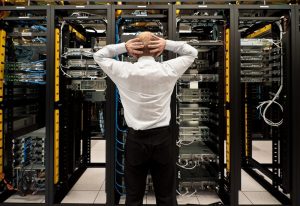 The typical computer network produced a lot of broadcast traffic. This is amplified when someone inadvertently connects one network outlet directly to another. This is not uncommon and has brought down several large networks. The only way to rule it out is to do a visual inspection of every network outlet on the premises.

There are a lot of network devices connected to a computer network. In recent times that list has grown from mostly computers to include IP phones, IP cameras, Printers, multi-function devices, etc. When one of these devices malfunctions, there can be network connectivity issues. The fastest way to isolate the device is to run the network will all extra devices powered down. Then power them on systematically and monitor.

Every computer network should have only one DHCP server. A DHCP server hands out IP addresses to devices on the network. The problems start when there is more than one DHCP handing out addresses. This means that some devices get the right IP, with the others losing network access and access to services. There are applications which monitor a network and alert when a rogue DHCP server is detected.