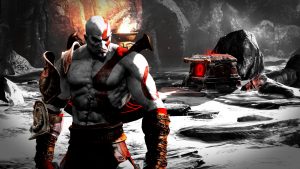 Unlike the Microsoft launch of the Xbox One X, Sony did not have a lot of excitement to offer at its E3 keynote. There were, however, some surprises and interesting announcements. Here are top four bits of news coming out of the presentation:

The latest in the Uncharted franchise, The Lost Legacy, is the first game in the series without main star Nathan Drake. However, his replacements will be familiar to anyone who has played the game, with Uncharted 2 treasure hunter Chloe Frazer and Uncharted 4: A Thief’s End mercenary Nadine Ross taking his place.

Days Gone is an open-world zombie game. Sony showed a seven minute trailer of the game, which allows for some interesting use of the mindless horde of zombies in addition to some stealth techniques. The game looks good but there is still no release date for the title.

The new God of War game introduces Kratos’ son Atreus to the franchise in a game now set in Norse mythology. Once again there was no release date, with a reference to early-2018 as a possible window for release. The demo video showed the typical hack-and-slash mechanics of the series and some gory finishing moves.