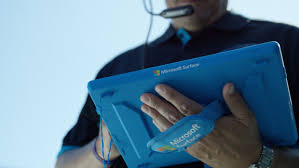 Microsoft’s well publicized push for Surface tablet use during NFL game seems to have backfired with viewers of the AFC championship game Sunday between the Denver Broncos and New England Patriots were told that the tablets on the Patriots’ sidelines had failed.

“They’re having some trouble with their Microsoft Surface tablets,” CBS’ sideline reporter Evan Washburn reported during the game. “On the last defensive possession the Patriots’ coaches did not have access to those tablets to show pictures to their players. NFL officials have been working at it. Some of those tablets are back in use, but not all of them. A lot of frustration that they didn’t have them on that last possession.”

As it turns out the tablets actually did not malfunction. It was a question of network connectivity.

“The outage, which struck during the first half, was brief, and the Patriots’ tablets were soon restored to working order. A Microsoft spokesman blamed the problem on a network connectivity issue rather than a tablet malfunction.”

No tablet, even the iPad would have worked in this situation. The actual announcement should have mentioned it as a network outage. This is one of the risks of paid product placement. Microsoft have paid a lot of money to the NFL for its use of the Surface tablets and unfortunately took the blame.